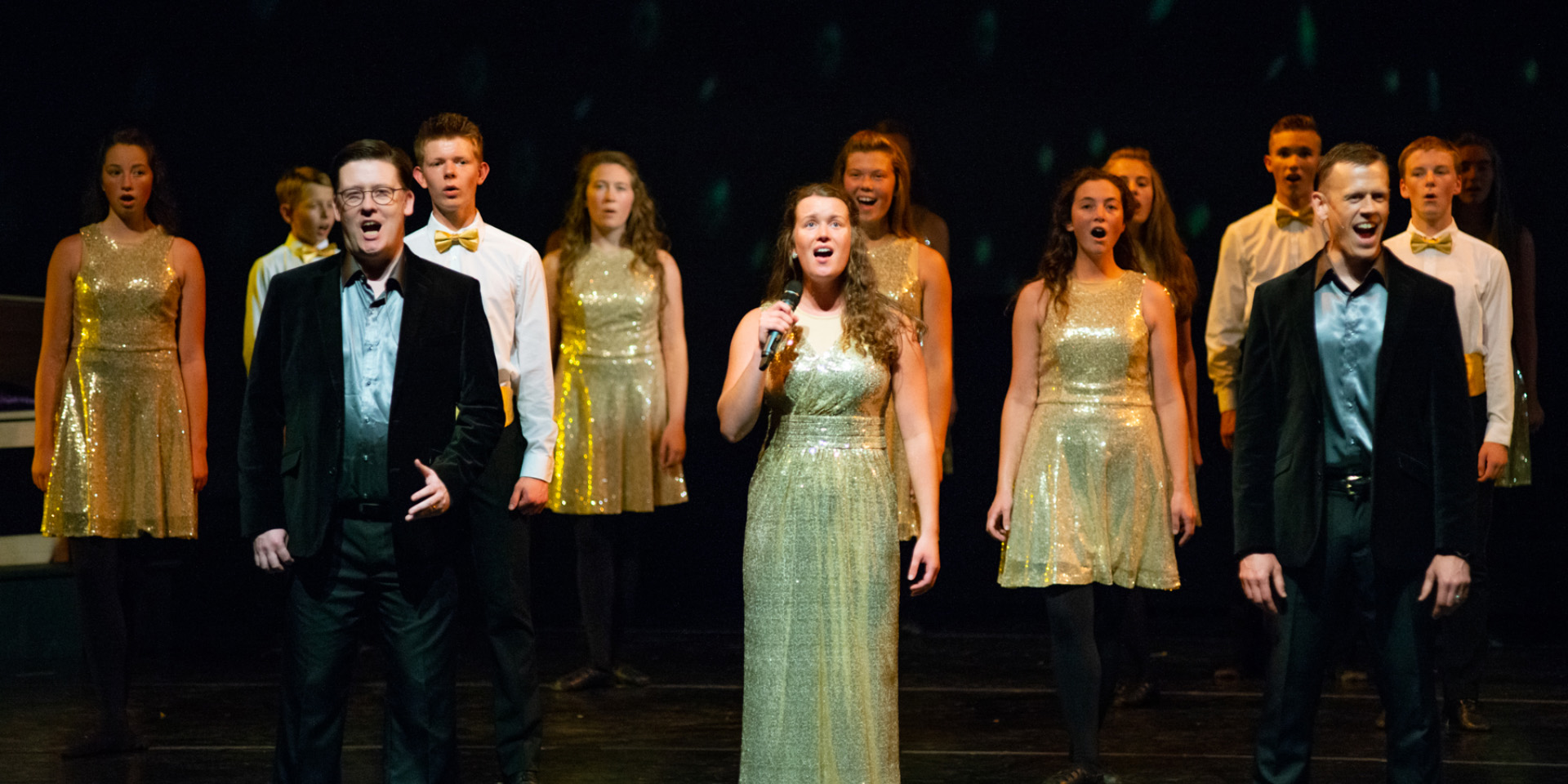 Our search for music led us to one of Hollywood’s finest film and television composers, and a world-class creator of Irish music. 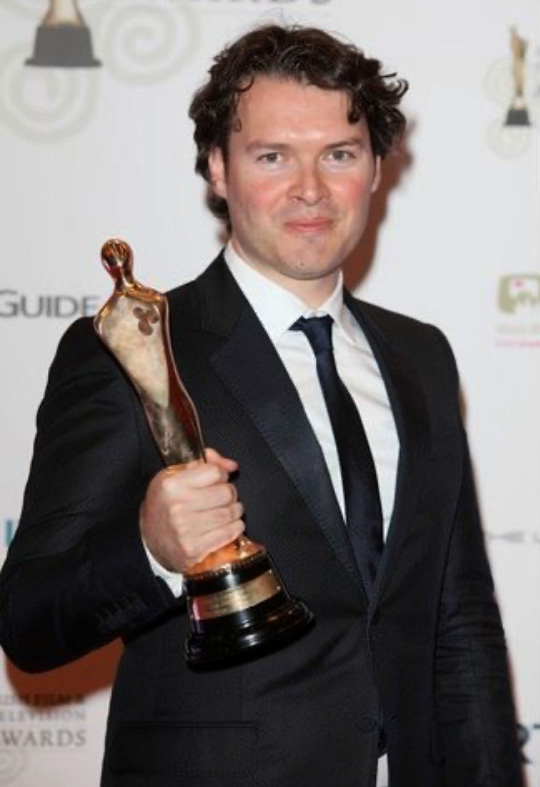 Golden Globe-nominated composer Brian Byrne is a multi-award-winning composer and producer. Born and raised in Ireland, Brian was educated at the Royal Scottish Academy of Music and Drama. He graduated in 1997 with first-class honors in music and was awarded The Peter Knox Memorial Award for overall performance. Later that year he received the Outstanding Musicianship Award from Berklee College’s touring faculty in Scotland and won the PRS Sir Arthur Bliss Prize Scholarship for composition, which enabled him to study film composition at London’s Royal College of Music.

Byrne moved to Los Angeles from Ireland in July 2003. Since then, he has consistently worked as a composer, conductor, songwriter, arranger and pianist—in the US and Europe. Brian recently won two World Soundtrack Awards and a Satellite Award for his music to the theme song and score for the movie Albert Nobbs and was recently nominated for a third World Soundtrack Award in 2016.

From huge orchestral scores to minimal ensemble compositions, Byrne has written music for films in many genres. He won his first Irish Film and Television Award for his original score for the Irish Sci-Fi comedy Zonad, directed by John Carney. He then scored an indie drama called The Good Doctor, starring Orlando Bloom, and went on to compose the score to the Oscar-nominated movie Albert Nobbs, starring Glenn Close.

Byrne is married to a native Oklahoman and splits his residence between Oklahoma, Los Angeles and Ireland. 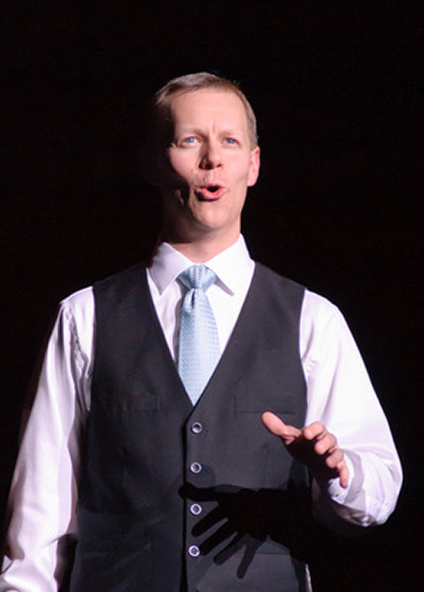 Ryan Malone is music director for Herbert W. Armstrong College (a four-year liberal arts college) and Imperial Academy (a private K-12 institution) in Edmond, Oklahoma. He has written and produced six full-length musicals, two oratorios, eight inspirational vocal/choral albums and dozens of individual works. His transcription of Richard Strauss’s Four Last Songs for soprano and piano trio was premiered by the Eroica Trio along with his wife in 2011 and recorded in 2018 on the Xolo label by Tess Remy-Schumacher, Hong Zhu and his wife Paula. Ryan performs extensively as pianist, vocalist and conductor, but he has also performed and recorded on the uilleann pipes, whistles and percussion. 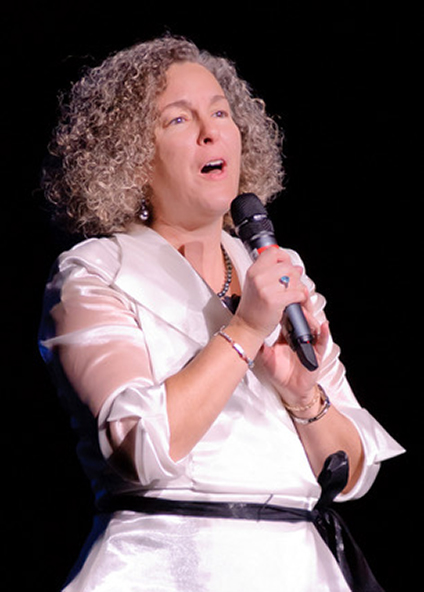 Paula Malone graduated from the University of Missouri–Columbia cum laude with a bachelor of music, studying with Ann Harrell. She has performed such operatic roles as the Queen of the Night in Mozart’s The Magic Flute, Gretel in Humperdinck’s Hansel and Gretel, the title role in Donizetti’s Lucia di Lamermoor, Christine in Yeston’s Phantom and Sophie from Richard Strauss’s Der Rosenkavalier. She has also collaborated with the Eroica Trio, the Romeros Guitar Quartet and Marvin Hamlisch. Paula has taught at the University of Central Oklahoma and has been on the voice faculty of Herbert W. Armstrong College since its opening in fall 2001. 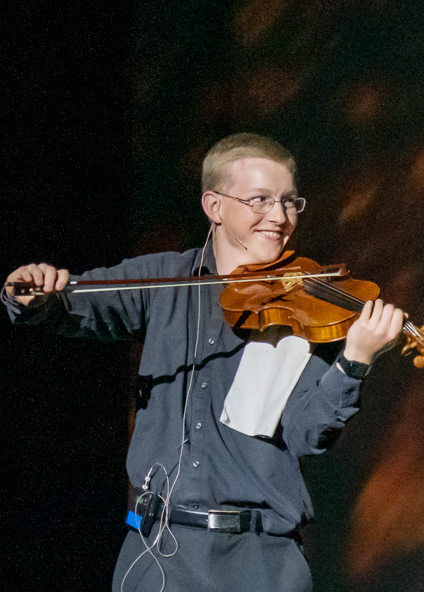 Ezekiel Malone (violin) is 17 years old and has been playing violin since age 6. He studies with Peter Nguyen, and has also performed in a master class with violin sensation Ray Chen. Ezekiel has served as concertmaster for the Armstrong Youth Orchestra. He is also accomplished on the viola, serving as principal violist in the Oklahoma Youth Orchestra and winning the 2019 Buttram Competition as part of the Oklahoma Orchestra League’s annual Music Olympics. Ezekiel also enjoys singing and performed the original role of Mahershalalhashbaz in The Book of Isaiah, a musical that premiered at Armstrong Auditorium in January 2015. 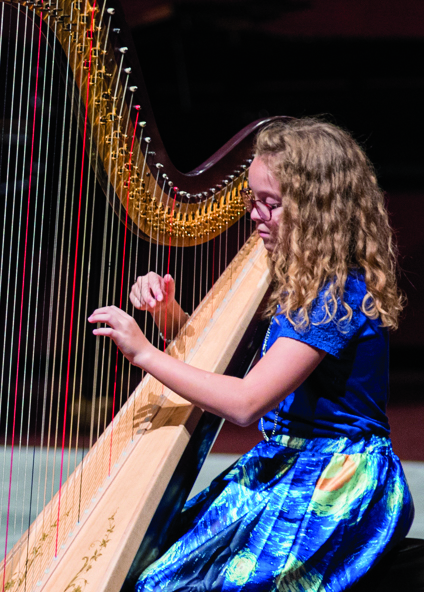 Skye Malone (harp) has been playing harp since age 10, studying with Gaye LeBlance-Germain (principal harpist for the Oklahoma City Philarmonic). In her young career, she has placed in two competitions sponsored by the Philadelphia Church of God and participated in workshops and classes featuring internationally acclaimed harpists. She has served as harpist and percussionist in the Armstrong Youth Orchestra and is also a budding vocalist, having sung the role of Fatherless in the original cast The Widow’s Might, debuted in Armstrong Auditorium in December 2016. 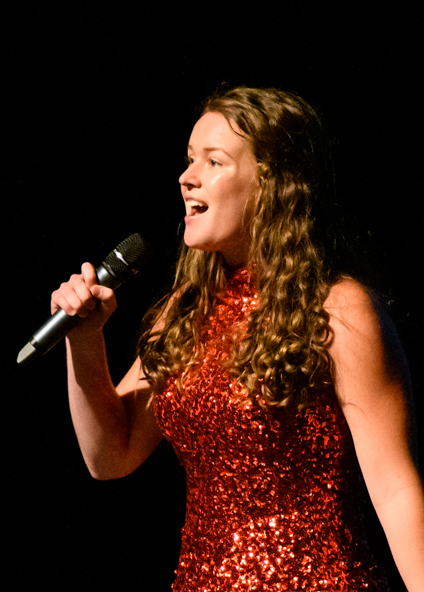 Vienna is currently a junior at Herbert W. Armstrong College. She has taken voice lessons for four years, although she has been been singing for as long as she can remember. When she was nine years old, Vienna performed a solo in Mendelssohn’s Elijah. She went on to sing, dance, and play violin in the Morning Star musical in 2014. She has also danced in various musicals such as Jeremiah, David, and The Widow’s Might. 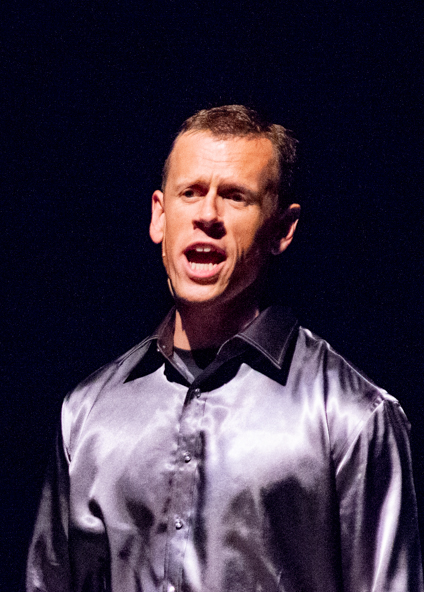 Joel Hilliker has been a soloist, instrumentalist, composer, arranger and producer since 1997. He graduated from Western Washington University with a bachelor of music in composition, and he participated in the prestigious Aspen Music Festival in 1995, studying composition and conducting. His stage debut was the title role in Armstrong Auditorium’s 2013 production of Jeremiah. He also sang the Narrator role in Ryan Malone’s Song of Songs, and Zadok in David: The Endless Throne Begins. He is managing editor of the Philadelphia Trumpet newsmagazine. He is joined in the cast by his three kids; wife, Michelle, is also busy backstage. 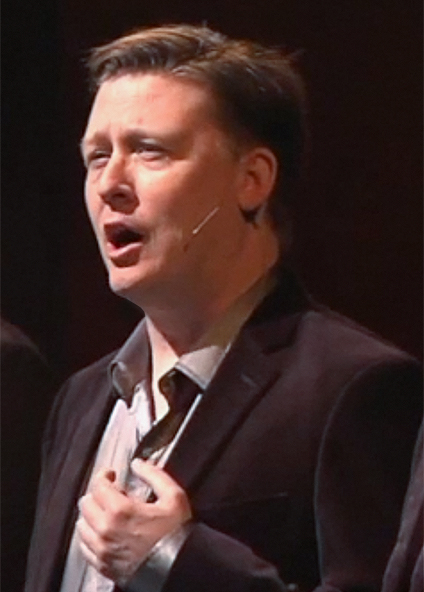 Mark Jenkins is assistant music director at Herbert W. Armstrong College where he teaches piano, voice, and conducts for the choral and orchestral programs. Born to a family of musicians, he began performing regularly in restaurants and coffee houses at age 12 in St. Louis. He was the first place winner of the Music Teachers National Association collegiate state piano competition in 1999, and first place winner of the University of Oklahoma concerto competition in 1998. He also studied voice with renowned Oklahoma baritone Thomas Carey, founder of Jazz in June and Cimarron Circuit Opera Company, for which he served as pianist and vocal coach. Mark’s classical and jazz performances have been featured on nine albums, and he has starred in leading roles in six musicals staged at Armstrong Auditorium. He has performed alongside such great artists as Branford Marsalis and Brian Stokes Mitchell. Mr. Jenkins received degrees in piano performance and voice performance with a secondary emphasis in foreign languages from the University of Oklahoma while studying with renowned pianist Andrew Cooperstock. Mark Jenkins lives in Guthrie with his wife, Valerie, and their two children, Megan and William. 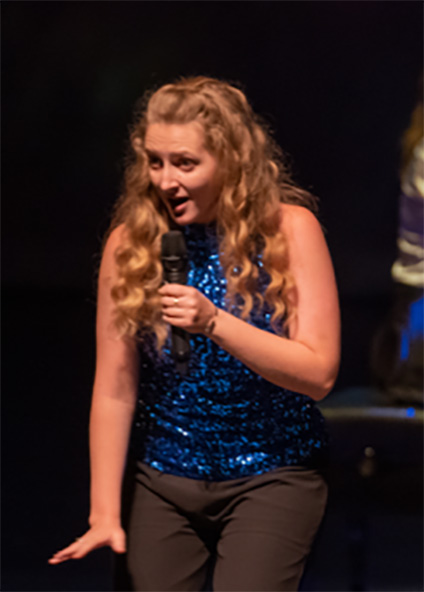 Jessica’s mother recalls that she was singing before she could even talk. She performed her first vocal solo, “Edelweiss” from The Sound of Music, when she was only seven years old. Jessica joined every choir she could in elementary school through college and started classical vocal training at the age of 13. Excluding one six-month hiatus, she has been taking voice lessons uninterrupted since 2011. She has sung in multiple Herbert W. Armstrong College musicals and other productions, most notably playing the main character, Ruth, in The Widow’s Might. Recently, she played “Claudia” in Paul: Ambassador in Bonds. Jessica comes from a very musical family and loves performing vocal arrangements with her parents and two older brothers, David and James. 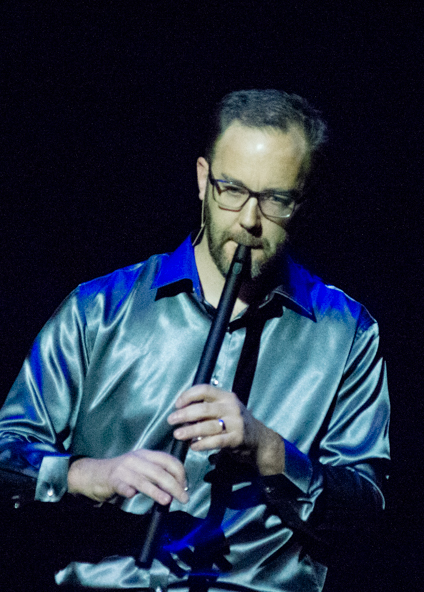 From faraway rural New Zealand, with deep Scottish roots, Steve Hercus is a long-time folk music enthusiast. He worked for a decade in the music industry as a journeyman piano technician, tuning and restoring pianos. He’s a whistle player these days, and has even fabricated a few of his own. Steve primarily plays Killarney and MK whistles. 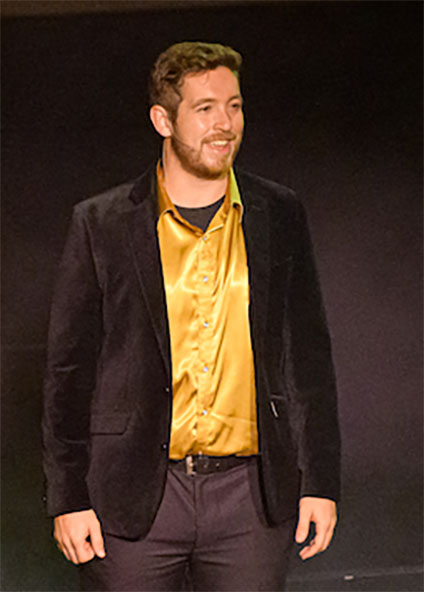 Micah’s family knew he was a born performer when his very energetic Irish dancing nabbed first place at the Southern Region Oireachtas in 2009. He was eight years old at the time. Growing up, he travelled around the U.S. to Irish dance competitions with his mom and his sisters, Alexa and Paris. In his teens, he decided to not continue dancing, but his passion for the piano landed him a spot in Celtic Throne anyway. Classically trained in piano since age five, Micah has competed multiple times in the Oklahoma City Music Olympics (placing third his first year) and has performed regularly since kindergarten. Micah loves the piano because it’s “the closest thing you can get to a full orchestra sound in one instrument.” Micah has also participated in choirs since his youth, and loves singing.